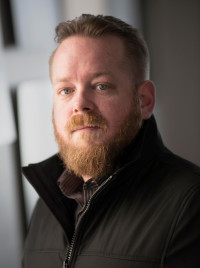 To understand the world and to profit from it one must interact with it, one must experiment. My artistic practice combines scientific curiosity with a constructive approach to making pictures. I utilize everyday objects and fundamental forces to illustrate experiences of wonder. For me, wonder is a state of mind somewhere between knowledge and uncertainty. An energy vibrates in that space between our perceptions of the world and the potential the mind senses for our interventions within the world.

Growing up in rural Maine, Caleb Charland spent much of his childhood helping his father renovate their family home. This work instilled in Charland an awareness of the potential use of materials and the ability to fabricate his visions. Charland earned a BFA in photography, with departmental honors, from the Massachusetts College of Art and Design in 2004, an MFA from the School of the Art Institute of Chicago, as a Trustees Fellow, in 2010, and was a participant at the Skowhegan School of Painting and Sculpture in 2009. In 2016 Charland received the prestigious Pollock-Krasner Foundation grant in photography.

His work has been exhibited nationally and internationally, notably in solo shows at Blue Sky Gallery, Portland, Oregon (2010), Michael Mazzeo Gallery, New York (2011), and Gallery Kayafas, Boston (2013). He has been included in dozens of group shows including at ClampArt, New York (2012), Brancolini Grimaldi, London (2012), and the deCordova Sculpture Park and Museum, Lincoln MA (2012, 2020). During the summer of 2014, Charland’s work was part of a group show, curated by Katherine Ware, at the New Mexico Museum of Art; in the summer of 2015, Charland was included in a group show entitled “Take One: Contemporary Photographs,” at the Philadelphia Museum of Art. Also in 2015, Charland was a featured speaker at the f295 Symposium in Pittsburgh, PA. His work is represented in several major collections including the Philadelphia Museum of Art, The Progressive Collection, and the Smithsonian American Art Museum, and he is featured regularly in literary publications.