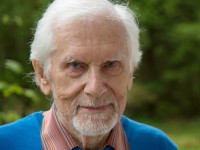 Known as a universal genius, Herbert W. Franke (b. 1927) is the forefather of computer art, co-founder of Ars Electronica, mastermind of the Metaverse, and science-fiction writer. He spent his entire career bridging the worlds of art and science.

Herbert W. Franke's passion for futurity has profoundly shaped computing and art for more than seven decades. In the 1950s and 60s, he experimented with generative photography, analog computers, and the first mainframe computers to create abstract algorithmic art. In 1970, a screen print from his SQUARE series was shown at the Venice Biennale. In 1979, he co-founded Ars Electronica, the world’s largest festival for new media art in the city of Linz. His work and writings, his visions and thoughts are especially relevant today with the advent of NFTs.

When Franke created his Twitter profile on March 8, 2022, within 24 hours, 10,000 people followed his account. His first tweet received over 15,000 likes and over 2,000 retweets, demonstrating how influential he is among the new generation of digital and crypto artists.