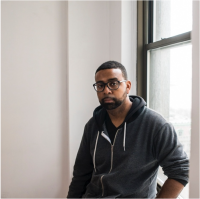 Jon Henry is a visual artist working with photography and text who hails from Queens, NY and resides in Brooklyn. His work reflects on family, sociopolitical issues, grief, trauma and healing within the African American community. His work has been published both nationally and internationally and exhibited in numerous galleries including Aperture Foundation, Smack Mellon, and BRIC among others. Known foremost for the cultural activism in his work, his projects include representational studies of athletes from different sports.

He was recently named one of The 30 New and Emerging Photographers for 2022,  and TIME Magazine NEXT100 for 2021. Henry was included in the Silver Eye Center for Photography Inaugural 2021 Silver List. In 2020, he was awarded the Arnold Newman Grant for New Directions in Photographic Portraiture, named an En Foco Fellow and an Emerging Artist by LensCulture's, and won the Film Photo Prize for Continuing Film Project sponsored by Kodak.