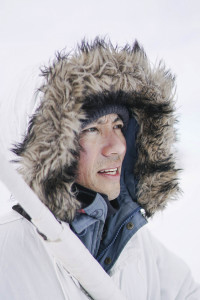 Kiliii Yuyan is an artist based in Seattle, but he can be found across the circumpolar Arctic much of the year.

Kiliii Yuyan illuminates stories of the Arctic and human communities connected to the land and sea. Informed by ancestry that is both Nanai/Hèzhé (Indigenous Siberian) and Sino-American, he explores the human relationship to the natural world from different cultural perspectives and extreme environments, on land and underwater. Kiliii is an award-winning contributor to National Geographic, TIME, and other major publications. Survival skills, coldwater diving, and a penchant for listening have been critical for Kiliii’s projects in extreme environments and cultures outside his own. On assignment, he has fled collapsing sea ice, survived a polar bear attack, and found kinship at the edges of the world. In addition, Kiliii builds traditional kayaks and contributes to the revitalization of Northern Indigenous and East Asian culture.