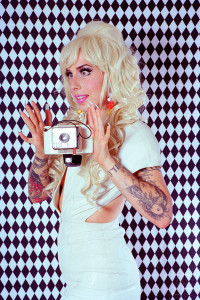 Parker Day is a Los Angeles-based photographer whose work deals with identity, the formation of our personas, and what lies beneath them.

Parker Day is a Los Angeles-based photographer whose work deals with identity, the formation of our personas, and what lies beneath them. Her first body of work, ICONS, premiered in a 2017 solo exhibition at Superchief Gallery LA. She has since had solo shows at Superchief Gallery Miami and New York, Peyer Fine Art in Zurich, and Niggeler Urban Contemporary in St. Moritz, Switzerland. Day has exhibited in group installations including Every Woman Biennial, FRONT Triennial in Cleveland, Spring/Break Art Show in New York, and the Juxtapoz Clubhouse in Miami during Art Basel in 2017. Her work has been featured in Vogue Italia, Juxtapoz, Vice, i-D, Paper, and Dazed, among others. Not a Cult published her monographs ICONS in 2017 and Possession in 2019. She was a contestant on the photography competition show Exposure on Hulu which premiered in 2021.