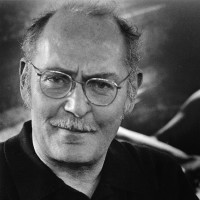 W. Eugene Smith (1918-1978) was a pioneer of photojournalism and master of the photographic essay. He is credited with creating the concept of the photo essay, telling a story in pictures with matching captions.

W. Eugene Smith (1918-1978) was a pioneer of photojournalism and master of the photographic essay. Born in Wichita, Kansas, Smith was first acclaimed for photographing the Pacific invasion during World War II while embedded with the Marines on Iwo Jima and Okinawa. After being severely wounded by mortar fire on Okinawa in 1945, Smith recuperated for a year in New York before taking one of his most famous photographs in 1946, 'The Walk to Paradise Garden.'

Smith forged an impressive career as one of LIFE magazine's most famous photographers. He is credited with creating the concept of the photo essay, telling a story in pictures with matching captions. His best known photo essays for LIFE included 'Country Doctor,' 'Nurse Midwife,' 'Spanish Village,' and 'Schweitzer: A Man of Mercy.'

After quitting LIFE in 1954 over a layout dispute, Smith pursued several renowned freelance projects. These included 'Pittsburgh,' the 'Jazz Loft,' and ultimately 'Minamata,' the story of the chemical poisoning of a Japanese fishing village, which is currently in wide release as a feature film starring Johnny Depp as W. Eugene Smith. That was his last major project. Shortly after accepting visiting teaching position at the University of Arizona's Center for Creative Photography, Smith died of a stroke in 1978 at age 59.

There are many books featuring the work and life of W. Eugene Smith, including the biography 'Shadow and Substance' and Aperture's 'Let Truth Be the Prejudice.' The W. Eugene Smith Memorial Fund continues his legacy decades later by awarding the annual W. Eugene Smith Grants in Humanistic Photography to support worthy, socially conscious projects that seek the betterment of people's lives."